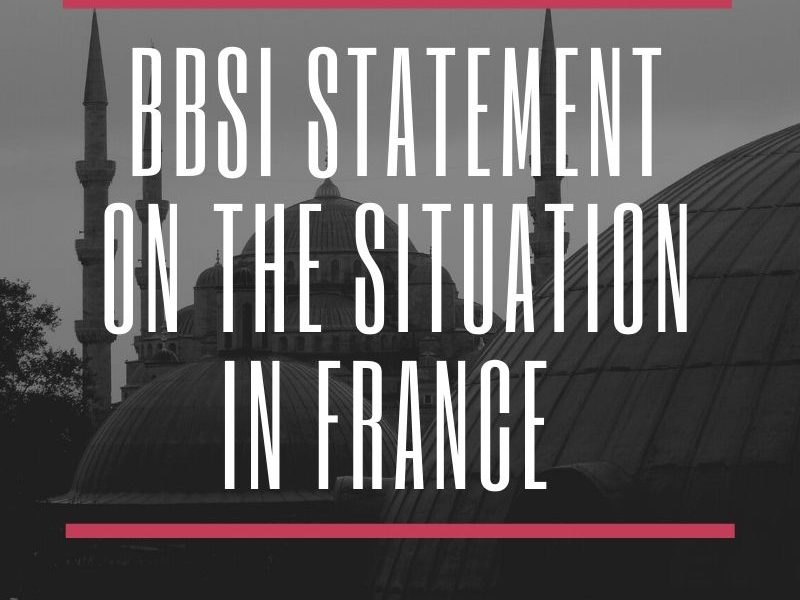 BBSI STATEMENT ON THE SITUATION IN FRANCE

In the Name of God, Merciful to all, Compassionate to each! May his peace and blessings be upon Prophet Muhammad, mercy to all humanity.

1.To the Muslim community of France: our message to you, and indeed to Muslims the world over, is one of solidarity. We feel your sense of persecution, being unable to speak in your own defence for fear of prosecution and having the indignity of suffering the mockery of the Prophet whom we hold most sacred writ large on the sides of buildings.

You are in our hearts and prayers. In asserting this, we stand with the fair-minded of all stripes, who seek to uphold justice, human rights and a common sense of humanity. This is an opportunity for those committed to justice to build bridges with each other on a national and international level across religious and ethnic differences.

The scapegoating of Jewish communities in the last century led to a human catastrophe that we are yet to recover from. Discourses around Islam and Muslims in Europe are worryingly starting to mirror those made in Nazi Germany about Jews. We need urgent collective action to change that discourse immediately.

2.To the French people and government: the heinous attacks in Paris and Nice are utterly deplorable and there is no justification for them. The same applies to Kenza and Amel, the veiled Muslim women stabbed not a day after the murder of Samuel Paty and the day before Vincent, Simone and the unnamed elderly lady. This cycle of violence must stop.

Defending the honour of the Prophet Muhammad does not give license to murder innocents and is entirely abhorrent to Islamic and human values, as well being entirely alien to the Prophetic Way. We vehemently reject the acts, no matter what the perpetrators claim. We sincerely pray that their family members find peace and consolation in this darkest of times.

Yet laïcité does not only entail separation of religion and state, but also insists that all citizens are equal. We call upon the French government to ensure equal and fair treatment for all its citizens, irrespective of their religious affiliation and background.

Freedom of speech is a virtue when the powerless are able to address the powerful without fear. But when it is used by a powerful majority to single out a disenfranchised and powerless minority, ritually humiliate them with mockery of that which they hold most dear, and criminalise their subsequent protests, it is no longer freedom of speech. It is now simply bullying, and it is not becoming of responsible leadership.

We all – every culture and group without exception – have that which we hold ‘sacred’: that which we cherish above all else and to which no dishonour will be tolerated. This may be, for example, a set of principles, a hallowed memory, or a symbol of collective identity. Each of these is held sacrosanct by that group, and their emotional connection to it is so strong that appeals to ‘freedom to insult it’ will pale into insignificance. For Muslims, the Prophet Muhammad is all of these together, and still more.

Of course, people should not be killed in the name of free speech, nor should Mosques be closed down to protect it. What will make a difference is careful and considered dialogue between ideas and people, civilisations and cultures. As the twentieth century shows, particularly the legacies of colonialism, ramming ideas down people’s throats only hardens their resolve. Ideas should be, and always have been, accepted on their merits. The world needs cool headed leadership.

3.To Muslims all over the world: we encourage you to celebrate the astounding, beautiful and unutterably noble man that was Muhammad (peace and blessings be upon him) and his message, who forgave his enemies when he had both the power and the right to punish them, who saw the potential beauty in the worst of people and found hope in the most hopeless of situations.

Let us demonstrate, through our own lives, character and actions, the impression he has made on us, and how his qualities have imprinted on our souls. Let us stand for the oppressed, support the dispossessed, and be the voices of those who cannot be heard. Let the hurt and pain in our hearts be transformed with grief and pity for the rejection and mockery of those blind to his beauty. For this was the way of our Prophet, peace and blessing be upon him, whose blessed example we seek to follow. Let us honour him in a way that would make him proud of us, seeking his intercession on the Day of Reckoning and his companionship in Paradise.

‘Equate not evil with good, but rather respond (to evil) in a way that is more beautiful, and you will find – unexpectedly – that those between whom and you there was enmity become now like your bosom friends. Yet none shall attain this except those who persevere with patience and determination…’ (Quran 41:34)